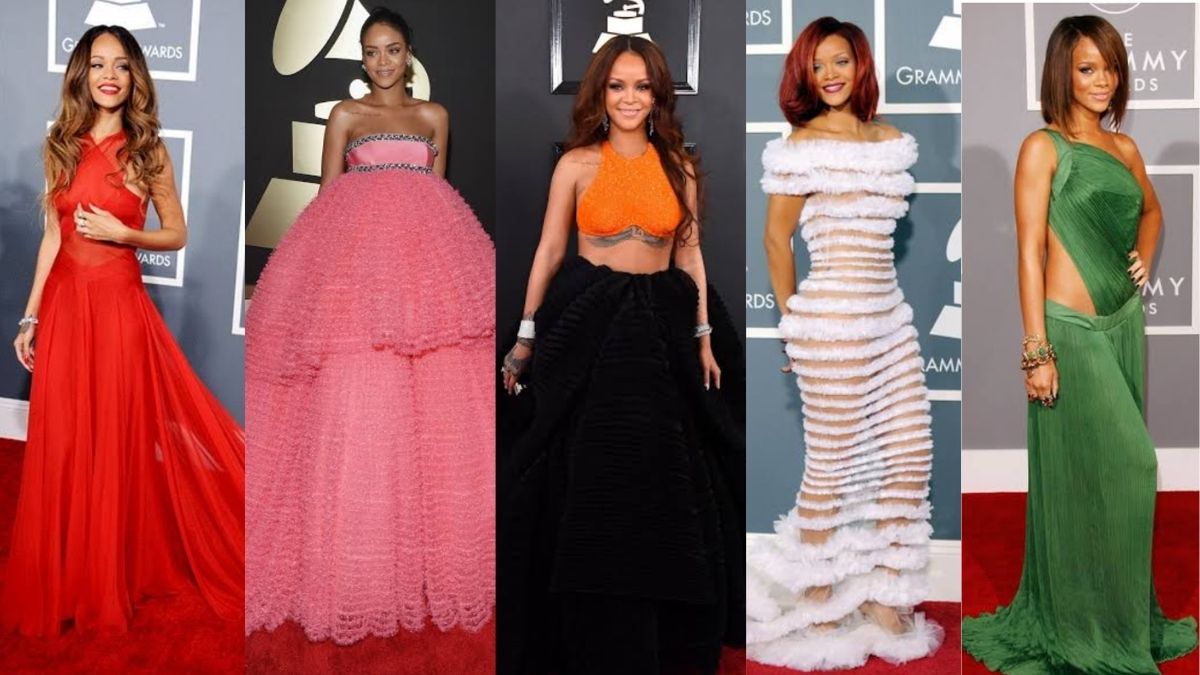 Bad girl RiRi can squash any red carpet if she decides to walk on it! The ‘high on fashion’ Grammys, have seen the finest of Rihanna’s blazing style statements, but unfortunately the singer and the business mogul has been skipping the Grammys past couple of years now. Recently she marked her absence in the 63rd Annual Grammy Awards held in Los Angeles, as she wasn’t nominated for any awards this year.

However, we decide to take a look on the ‘oomph factor’ that the singer has been adding to the past Grammy events, through her evolved ensembles! We list down 8 stunning red-carpet looks of Rihanna from the Grammys, check it out:

Rihanna stunned the red carpet look in 2017 as she flaunted a custom Armani Privé ensemble. The bralette top giving us a good glimpse of her chest tattoo, embroidered in sparkling tangerine orange crystals. The singer paired this crop top with a stunning plissé skirt of voluminous black silk organza.

RiRi grabbed all the limelight as she walked down the red carpet of Grammy 2015, wearing a Giambattista Valli strapless, empire waist tulle dream from the Haute Couture collection. She definitely looked like a princess straight out of some fairytale, however the singer had also attracted memes over her beautiful outfit!

The bad girl decided to add on an extra dose of hotness, as she turned heads on the red carpet of Grammys 2012. The singer along with Giorgio Armani, designed the racy black dress, which was backless and had a stunning slit a little above from her knee.

Rihanna went on taking a bold step complimenting the ‘high on fashion’ style statement of the Grammys 2011. She walked the red carpet dotting a see-through ruffled Jean Paul Gaultier gown. The business mogul decided to go red-headed with a tousled bob and we must take that when is comes to taking risks in fashion, RiRi takes it heads on!

No one ever made white look this hot! Rihanna decided to flaunt a gorgeous white high-collared chiffon gown on the red carpet of Grammy 2010. The elegant gown was designed by Elie Saab Couture, which had feather detailing on it’s neckline. However the singer’s hair style had grabbed our attention, which added an ‘oomph factor’ to her overall look.

Rihanna knows how to keep it short and sexy as she sported a blue knee length umbrella Zac Posen dress on the red carpet of Grammy 2008. Her short hair went well with her entire look.

Rihanna made her debut in the Grammys in 2007, as she confidently left an impression with her stlye statment wearing a green pleated, one-shoulder gown by Roberto Cavalli.