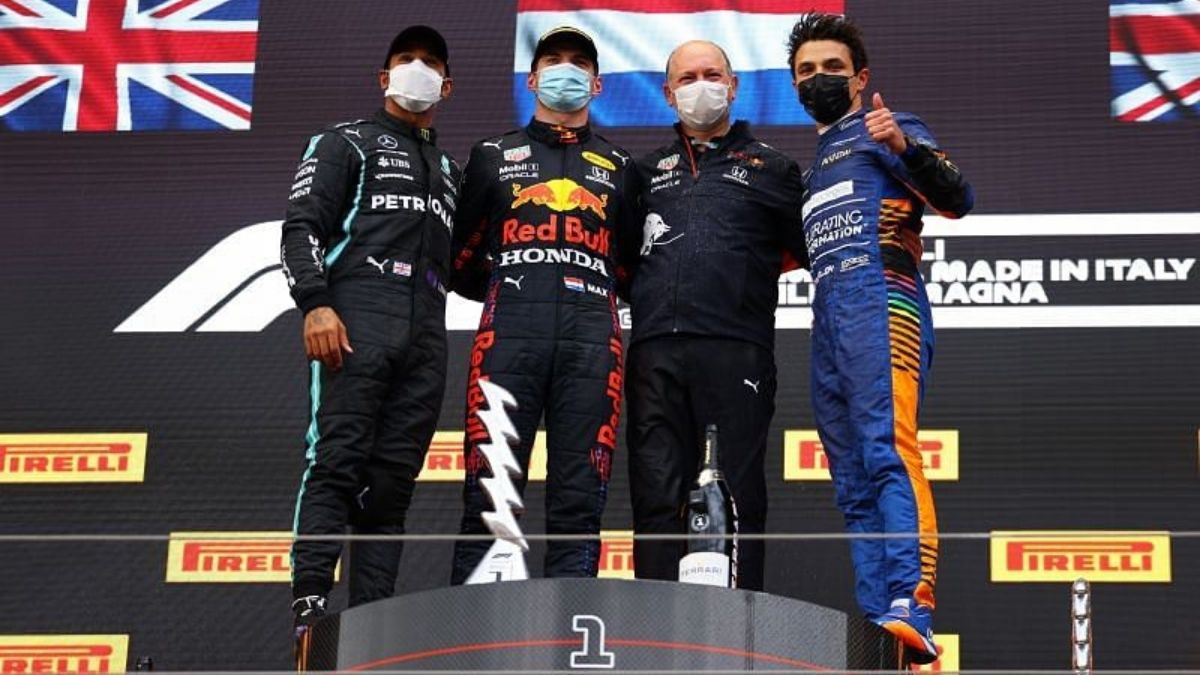 Formula one returned to the Imola circuit for the second time in the turbo hybrid era after giving us an exciting race last season. The whole weekend looked pretty dicey with Mercedes topping the charts in the first two practice sessions and the Redbulls having some sort of issues but they bounced back in the third session and were looking to take the pole position. Max and Sergio both had a great qualifying and it was expected that Max would take pole but a bad flying lap that messed up his first sector time, which meant that he would start the race from 3rd position behind his teammate Sergio Perez who qualified 2nd on the Soft tires but was on a different strategy altogether, Sergio was surprised at this and felt that he is still not upto speed with his new car. While Hamilton took his career’s 99th pole position it wasn’t all merry at the Mercedes garage as his teammates Valtteri Bottas was only 8th place which left him vulnerable to the attack of the bulls during the race. McLaren’s joy was snatched when Lando Norris posted a time that got him to third place but got relegated to seventh for exceeding track limits. It wasn’t a good day for the young rookie Yuki Tsunoda also who crashed while setting a time which saw him start from the last. Antonio Giovanazzi and Nikita Mazepin also had a coming together as Nikita overtook Antonio while on his final flying lap which prevented him from setting a good time and getting him out of Q1.

The hopes of rain were looking bleak as there was only a 10% chance of rain and was supposed to miss the track but the racing gods and mother nature had different plans when there was a pour during the shakedown laps and we got the first wet race of the year. Charles Leclerc has a slip during the formation lap on his way to grid showed how slippery the track was and the tires were not upto temperature. When the 5 lights went out Max had a great start overtaking his teammate and Lewis by the first turn and was leading the race but just as the race’s first lap was going to get over Nicolas Latifi went into the wall which brought out the safety car for a few laps.

By that time Yuki had also made up some places and things were looking good until Sergio Perez was handed a 10 second stop and go penalty for overtaking under the safety car. It was’t a good afternoon for Sebastian Vettel too as he was also given the same penalty for his team failing to fit the tires 5 minutes before the race started which he later criticised that he should have been given it before as he could have made up the lost time. He started his race from the pitlane due to some issues with the car, it hasn’t been a great start for him with his new team. The race was getting out of Lewis’s hand with Vestappen gaining an emphatic lead over the British driver which was about to get worse when he slid off the track on lap 31 damaging his front wing and almsot taking him out of the race. But F1 is an unpredictable sport where anything can happen at anytime and the crash between Bottas and Russell in the Williams brought out the red flag which got the session to a hold until the debris and the cars were removed from the track. Both drivers blamed each other but it was ruled out as a racing incident. This came as a blessing in disguise for Hamilton who had slipped down the order to 9th place.

With a new front wing on and fresh tires, Hamilton led a charge down the field and managed to get second place after a tough duel with McLaren’s Lando Norris who was pushing too hard on the soft tires but got the podium and results home for his team. Max finished the race with the win and broke his Italian curse. Ferrari also had a strong race finishing 4th and 5th. They have made some amazing progress from where they were last year and Charles did not have any radio contact with his team for the second half of the race. It was a race to forget for Sergio Perez who finished 12th because of a spin after the safety car restart, the same issue with Yuki which had left his charge through the field for nothing. Kimi Raikonen was also stripped off his points after overtaking during the safety car which got both the Alpines in the points. Sebastian Vettel had to retire his car towards the end due to some gear box issues.

Redbull can really charge for the title if this kind of performance continues throughout the season as it is clear they have more pace than Mercedes. Hamilton managed to keep his lead with one point thanks to the fastest lap but things are sure to be heated up for the rest of the season. It’s going to be an interesting race in Portugal next Sunday.